She's not here though. Like an awful lot of people I woke up on Sunday morning to the news that Dr Dianne Tillotson – or @hipbookfairy as many of us will always think of her – had died. I cried a bit. I suspect I'm not alone in that. If you didn't know her, then that loss is yours. If you did know her, then that loss is ours. Because she was one of the best people I've encountered on twitter. She was funny, she was clever, she was kind, formidable, gentle, straight talking, fascinating, full of knowledge, yet she always wore her learning lightly, and despite being hugely appreciative of other people and their work, never once do I have a memory of her showing off all that she knew and had worked on. All she ever wanted to do was share her own enthusiasm in the hope of encouraging others.

And she did. She truly did. It didn't matter to her how many letters you had after your name or how many hours you'd spent in dusty archives researching esoteric brasses or church crawling in ever increasing selfimportance, she just cared that you cared. About anything. If it was important to you, she took an interest, because despite her searing intelligence and rock solid understanding of so many things, what fired her most were people. I don't think there have been many I've come across who were so joyfully engaged with people, regardless of subject. There were no airs and graces, no pretensions, no false front with Dianne. And she didn't entertain it from others either, her legendary bluntness coming to the fore as and when required, but always with a gleam in her eye, and the unspoken understanding that she would forgive you almost anything, but wouldn't let you get away with much.

Generous is the word that keeps coming to mind when I think of her. She gave so freely, so easily, so simply that it never felt she was doing it as a favour or an obligation. Her generosity was really altruism. She saw an opportunity to help others, so she did. She never thought about receiving. Never thought about what she got back from it, just a natural reflex to help, and to make things better. And she did, she always did. The number of word exchanged between us pales into insignificance when I think about what they really meant. She was an absolute one off, one time, one individual who took her own path and forever was drawn to those who did the same. She inspired and encouraged so many others, and we are all diminished by her loss. She was, in her own words, a volunteer with attitude. I shall miss her, and I lack the eloquence to truly pay tribute to her. All I can think is that if she meant so much to me and others who never even met her, then how much did she influence and shape the lives of those who really knew her best, who benefited from her calm, witty, insightful wisdom?

A better person than I reminded me last night that 'No one is actually dead until the ripples they cause in the world die away'. With Dianne, those ripples will continue into the foreseeable future, for at least as long as I strive and endure. She pushed me forward whilst holding my hand. I shall miss her presence, almost more than I can say, the kind consideration for everyone she came across, the humour, the biting wit and silliness that never once hid just how good a person she was, and just what a hinterland there was behind every insight.

If she were here right now, she'd be wagging a gently chiding finger at me, telling me to write more, telling me that I have the same spirit in me, telling me to put my boots on and kick the arse out of the things I can do to make the world a better place. If she were here right now, I'd know she was right. She always was. But she's not here, and won't be, so instead I've written this. Mawkish and self-indulgent it may be, and she'd almost certainly give me a good ticking off for it, but I know the difference she made to so many of us. So I am writing this in my most bright and colourful clothes, with my biggest boots on, flowers in my hair, being that 'spunky chick with attitood' that she said I was, because she believed in me. And I never took the chance to tell her how much she meant to me, and to so many others.

RIP Dianne. We've lost our irreplacable twitter fairy, so instead we've been calling angels down to earth in your stead. Because I believe we need them. 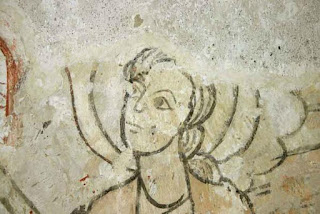