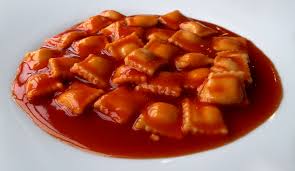 Here’s a story that will tell you how much of an over empathic twat I am. When I was about eight or nine, dinner was quite often just me on my own at the kitchen table for one night a week. My siblings were then sidling along the paths of teenagehood, so were probably up to some kind of illicit, forbidden behaviours, and my parents were the weird type of grown ups who work all day and then ‘relax’ by being sporty and athletic. Playing tennis, squash, that kind of odd, slightly worrying behaviour. One night, Mum, in a rush, had grabbed something from the shelf of the local shop to give me dinner, something that could just be heated up on the hob. Not something she’d bought before, but thought it’d be ok. Tinned ravioli.

I’m not going to lie. I’m not even going to exaggerate, although you’ll think I am. It was disgusting. Flaccid, slimy mush. The type of thing you’d perhaps offer to a six month old as their first Real Meal after a week of baby rice, except that this food tasted preowned and definitely preunloved. The shudder that engulfed me as the pasta pillow dissolved on my tongue without me even having to chew is still ‘yeah, childbirth wasn’t great, but was it as bad as…?’ vivid now. Then the full horror of rehydrated, overhydrated mechanically recovered meat that was probably more eyelash and toenail of ferret than farmyard.

Swallowing it was like downing a cup of cold sick. Keeping it down marks as perhaps the greatest single triumph of my life. It was eating as suicide because I no longer wanted to live in a world where such a food could exist. The severity of it was such that I put my book down on the table (unheard of behaviour), dropped the fork, and prepared to push the dish away, suppressing the primal urge to hurl it into the back garden and kill it with fire. How could this even happen? How could anyone come up with something so hideous? Had no one thought to taste it before it was unleashed on an unknowing and unsuspecting public? Had no one considered what could happen to a society where such atrocities are committed on a daily basis? How the buggery bastarding hell had this goatfuck of food been conceived, brought into existence, dressed in a pretty picture, and ushered before, holding out its pleated skirt, smiling shyly and waiting for me to express approval? Who was responsible for this and how can I destroy them and all that they hol…

…d on a second. Someone, somewhere. This is their life. This is their job. In some monstrosity of a factory somewhere, doubtless windowless, airless, noisy and uncomfortable. Day in, day out, making this fetid slop, knowing that a complete stranger will hate them to their grave for what they’ve done. How terrible to have that on your conscience. How awful.  That poor bastard. Tears filled my eyes. A new realisation pricked my tear ducts harder. One day, they’re going to run out of victims. One day, everyone will know what they’ve done, no one will buy tinned ravioli, the factory will go out of business, they’ll lose their job, their innocent children will suffer, they’ll end up homeless, they’ll actually die of death. Because no one will buy tinned ravioli.

This put a new light on my situation. Now I had to shoulder some responsibility. As vomit-inducing as I found it, I could not accept the blame for my rejected tinned ravioli tearing a family apart. I had to help, I had no choice, it was my duty.

‘How’s the ravioli?’ Mum asked as she swished past, resplendent in polo shirt and tennis skirt.

‘MMMMPPPFFF!’ Double thumbs up, mouth full, eyes rolled heavenwards to indicate the ecstatic state I was in with this delicious tinned pasta.

‘Good! I thought I’d give it a go, something different for a change. As it’s a hit, I’ll get it again.’

‘!!’ My enthusiastic whimper may have sounded like an involuntary spasm of primal fear and distress, but I can assure you it was just the dying whelp of my tinned ravioli foodgasm. Honest.

And that is why for about six months I went without dinner every Tuesday evening. I had to time my run carefully, and make sure I had stuff to put over it once I’d silently scraped it into the bin (plastic spoons are your friend in this situation). Even the dog wouldn’t eat it, and there were times when he ate, variously, a whole packet of butter, a catering tin of chicken fat, two frozen rolls, and most memorably to my eight year old self, another dogs poo. So convinced was I that only I could secure the future of the tinned ravioli factory, I gamely pretended, every week, that this meal was the greatest treat of all.

What a bloody twat. What an overly empathetic twat, and from such a young age. I want elderly, grey-haired, saggy titted me as I am now to go back and shake Young Me by the throat and bellow ‘STOP THIS MADNESS. You are not responsible for the livelihoods of people working in a fecking tinned ravioli factory. You hate this manure masquerading as food, and your sole weekly tin will not have any impact on sales. CEASE.’

Christ, ah, I wish I could. I wish I had. Because being empathetic to the degree that I am is a right pain in the arse. For one thing, I cry all the time, about everything, always, especially when it has nothing to do with me. I cry at game shows. I cry when I see people shouting at their children (although I still retain the ability to get shitty with The Blondies). I cry at sports things sportingly sporting (one reason we don’t have a telly is that I can barely cope with the radio commentary. Seeing athlete’s faces would completely finish me off). I cry at architectural graffiti inscriptions. I even – here’s a bucket to laughvomit into – cry when I see things like unused playgrounds. ‘Where are the children?’ I sob. ‘Mr Happy Tree just wants the children to play-ha-hay wiiiiiith hiiiim…’

Yeah, piss yourselves; I know I’m a twat. Twatty Mactwatface. Thing is, as embarrassing as I am to be around, and as fucking annoying as I can be, I am aware of other people in ways that perhaps most are not. And life gets complicated when you’re like that. You are attuned to picking up every possibility that someone may be feeling. And it’s far, far too easy to forget that other people don’t see the world like that, that I’m the odd one, that I’m not touchy feely by any stretch so keep your fucking hands where I can see them, but I’m used to thinking about people with consideration. And when I feel I don’t get that in return, it stings like a bitch. I deal better with reassurance than rejection. Sometimes perspective is better than the moral high ground. And absolutely fucking anything is better than tinned ravioli.
Posted by Put Up With Rain at 21:17 No comments:

The truth about love Part II

The truth about love

I wrote that nearly 18 months ago. 'The truth about love'. Seems a bit glib now. It was true, still is, in some ways. There are no lies in it. But the truth as it is now, is that it was based upon a false premise. I was not loved then, and I am certainly not loved now. This is a hard truth. I could soften it with mentions of The Blondies, my parents, friends who care, readers, etc., all of whom play their part in understanding and encouraging me. I cannot lie and pretend that this does not make my life richer and more enjoyable. But the truth remains: I was not loved.

I may have been told it twenty times a day 'loving you'. I may have received a text every few hours 'loving you'.I may have been assured of it in the way his world was nothing more than work and home, no friends, no outside interests, no distractions or complications. But I was not loved.

Cared about? Then, yes. My welfare was important. Consideration was given. Things that I did not request or require were done 'for me'. He would 'let' me do certain things I wanted to do, as long as I knew there would be a price to pay, a reckoning, in my own fashion. He was a good father to The Blondies on holidays, their interests and wants coinciding, allowing me the time and space I jealously, selfishly need in order to write. I cannot say he was wholly unsupportive in every way, because it would be unfair and untrue. But I was not loved.

Love shows itself in unexpected and unthought of ways. The ways in which I listed what love truly is are still true, still what I believe, still what I will shout from the rooftops (or just hammer out onto a laptop in Spain whilst The Blondies are out with Mum for half an hour). And for that reason, I know I was not loved.

Love was not love, for either of us. I did not love him either, by the end. I don't know when it stopped. Most likely, it ebbed away, a slow but pervasive drought of the delta of a love I once thought defined my life, the little channels of the same love that once spread so broadly, gradually being extinguished as each stream became a trickle before dying, unnoticed until it was too late. I too have my share of blame, and have apologised, felt remorse, tried to make amends. I have received nothing in return, only a freezing out by many, and certainly no apology from anyone. And that it how I know I was not loved.


Love and I have many things in common, it would seem. Recherché, elusive, unfathomable. Annoying, difficult, impertinent. But love and I are strangers, it seems to me now. Because I am not, never was, and probably never will be, loved.
Posted by Put Up With Rain at 17:10 3 comments: