This could be a bit of a miserable read, so apologies in advance. I've been dickering over whether or not to blog about my experience of depression for a while now, especially in the light of the truly brilliant blog post by Hyperbole and a Half, which was sadly followed by tweets from the insufferable Louise Mensch about exercise being 'the best antidepressant', which strongly suggests she herself has no direct experience of depression. Rather like Viv Groskop who wrote a piece for The Guardian that confused grief and depression and included one mother saying 'You can't afford the luxury of being depressed when you have children'. So before we get going, I'll offer up my own definition of what depression is. Depression isn't feeling a bit down. Depression isn't feeling sorry for yourself. Depression doesn't come and go. Depression isn't something you can just shake off. Going for a brisk walk isn't going to cure depression. Depression can take over your life in the most horrible and encompassing ways

Depression doesn't always have one single cause. Sometimes there is an obvious starting point -  a bad thing happens, it fucks you up, you can't move on from it. But quite often, that isn't the case. Generally, depression doesn't arrive, fully formed, overnight. It's a gradual process that insinuates itself in your mind and slowly drags you down, further and further away from the person you are. It's like being possessed, in some respects - a force inside you that uses your own mind against you, silently and invisibly growing in strength as it leeches the part of you that makes you who you are. And so that becomes part of the problem. You feel guilty for feeling so bad all the time (the word 'depression' may not even have occurred to you at this point). You tell yourself 'But nothing bad has happened for me to feel so awful! How can I be so self-indulgent, so self-obsessed?' And the answer presents itself in your mind 'Because you are not a very nice person. Other people have real  problems, you don't, but because you are so useless, you can only see the world through your prism of misery. Tchah. You're pathetic.' These thoughts aren't helpful. And they make you feel ashamed.

Shame. That was something I felt pretty much constantly. Shame, because I was young, healthy, and with a beautiful baby (I think depression's always been part of my personality, but having children really seemed to trigger it quite badly), yet I felt as though there was some great secret that people hadn't told me, chiefly: how do you cope when it feels like everything is unravelling around you? When you genuinely have no idea how you are going to get through the next hour, the hour after that, and the next, this day, this week? Is that what life with children is? Is this normal? Everyone says your life changes after you become a parent - is this what they mean? So I didn't tell anyone. It seemed like to great a weakness to confess that actually, no, I'm not ok, I'm not coping, I'm scared, I need help. No one seemed to notice anything was amiss, so perhaps this is normal life after all, and I am one of the useless ones who can't manage it.

Manic/Exhaustion. I can't pretend to know too much about bipolar - my diagnosis is/was severe depression and anxiety. But I do remember that some days, in an effort to feel better on my own, I would take on far, far too much. I would deal with the kids first thing, work a ten hour day, come home, cook, clean, settle down until A went to bed, and then I'd stay up until three or four in the morning, on the internet, washing clothes, cooking, absolutely incapable of sleep. Then I'd lie on the sofa until six, watching documentaries, before repeating it all over again. But most of the time I was a mess. Clothes might get washed and hung up on the line. But they would stay on the line for three weeks, by which time they would be faded and in need of a wash again. The bathroom bin was never emptied. The ashtray in the garden would fill, overflow and eventually spill soggy fag butts across the front step that visitors would have to delicately step over. Filing trays went unfiled. Emails, even from people whom I loved dearly, went unanswered. Looking back now, it seems incredible to me that no one stepped in and said 'Something is very wrong.' But then, as I said up there ^^ it's a gradual slide into depression. It didn't happen in the space of a few hours. But I can tell you that if someone suggested to me that I try exercise as a way of improving my mood, I would have nodded, thought about it, felt overwhelmed, and not exercised. And then I would have felt like even more of a failure. Because that was pretty much the pattern of my life for at least five years.

So it becomes a vicious circle. You feel terrible. You feel ashamed about feeling terrible. You try to stop feeling terrible. You fail. You feel more terrible. You feel more ashamed about feeling more terrible... Your thoughts become stuck in such a miserable whirlwind of fear and hopelessness that you cease to believe it will ever shift away from you. And if you do tentatively tell someone you're not ok, then their response can be crucial. In my case A had no understanding of mental health. It was something not to be spoken about, it was weird, anyone with mental health problems should be best avoided. He doesn't feel like that now, thankfully. And I have seen more of a shift in how people talk about mental health problems. But there are still huge misunderstandings, sometimes wilfully so (La Mensch being one such example). So I think it's important to be as honest as we can with those who haven't experienced problems. Explain, Educate, Inform. And let them know that being mental is shit. But it does have positives, in that you get to meet some of the most kind and understanding people you could ever hope to encounter.

I haven't really gone anywhere with this, have I? But if you know someone with mental health problems, perhaps this will help you to understand just what is going on inside their head, and that telling them to 'just forget about feeling bad' is never going to work. Talking will. Antidepressants will. But exercise? Pah. That's for when they're feeling better, and able to see the world in more than just one way.

And if you've made it this far, well done. Here's a picture of Ed Balls to cheer us all up. 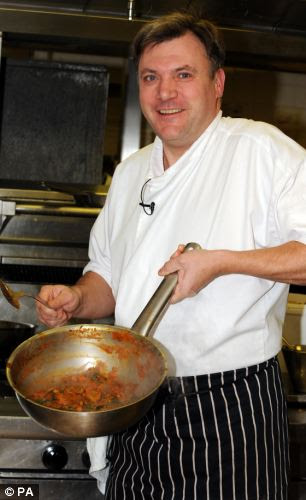 I am generally a fairly relaxed person. My house is quite messy, my children go longer than they should between haircuts, I don't mind too much if the eight year old blondie slops a bit of milk on the kitchen counter. Very much a live and let live type of person, I accept that other people have the right to differing opinions and as long as they're not being offensive or hurtful about it, then that's fine. Go ahead, do your thing that makes you happy, as long as you are causing no harm.

However, now and then, something happens to change my normal reaction of a shrug and a 'meh'. I call it The Rage.

When The Rage comes calling, it's best to cover your hair and your eyes. Shield young children. Lock your door and bar your windows, because this is not going to be pretty. It probably won't last for long, but whilst it is here it is entirely possible that you will become so terrified you might just crap yourself so hard that you toot out your own sphincter. So traumatised that the rest of your life will be haunted by the memory of The Rage. So petrified with fear that you vomit up your own appendix (and maybe even someone elses, which would be quite a cool trick).

The Rage is an unpredictable beast. I can never quite tell when it is going to emerge. Actually 'emerge' is the wrong word as it suggests a gradual entry into the world. The Rage is not tentative. The Rage is not careful. The Rage does not look down at the pavement to check it's not about to step in dog poo. The Rage bursts, fully-formed, into the world and by Christ, does the world get to know about it. The Rage reminds me of the John Hurt chest explosion in Alien in how it makes itself known. Any number of things can summon it, although I have discovered that the most reliable triggers are 1) facebook, 2) twitter, 3) other people and 4) pretty much anybloodything.

The Rage usually gives me about a demisemihemimillisecond of notice before it arrives. And in that demisemihemimillisecond a mindblowing physical transformation takes place. Mild mannered, bespectacled Lucy Benedict is no more. My incisors lengthen. My stubby and unmatching fingernails are replaced with inch long talons. My eyes shoot sparks. My lungs gain an extra ten litres of capacity in order to take deeper breaths. My jaw develops the ability to dislocate itself, all the better to roar with. My hair is no longer hair but a mass of writhing, hissing snakes (exactly like Medusa in the Harryhausen Clash of the Titans, yes). I grow at least a foot taller and I drop my shoulders back, ready to square up. Finally, and most powerfully, I lose all inhibitions, logic, reason, rationality, memory, eloquence, articulation, propriety and common sense. It's a bit like the frenzy you sometimes get into during sex. Nothing and no one matters quite so much as this very second, and you couldn't give the tiniest little squeak about anything else.

And then The Rage takes over. If out in public, the general sequence of events is as follows:
If The Rage happens about something I've seen or read online, it manifests itself slightly differently.
But it's not just chance encounters with people that unleash The Rage. There are things that, simply by their very existence, give me The Rage. Here is a list of a few of them (the ones I can be arsed to dredge up):
I'm not saying The Rage is all bad. It does command a certain amount of respect from those who have survived witnessing one of the incidents. And when the blondies see the transformation begin, they know that if they're quick enough with a cuddle and a 'Love you Mum', they may just be able to wrestle The Rage back into the cage and survive. Again.
Posted by Put Up With Rain at 16:21 1 comment: