When did we stop guarding against disaster and start hoping to attract good fortune? Not me, obviously, I live life in a default BRACE! BRACE! position, hoping that whatever comes next won’t leave permanent damage, or at least the kind that can be artfully disguised. I mean ‘we’ in a broader sense, people, them, us, you.

As the type of person who loves folklore and superstitions and bollocks like that, what has struck me lately is how much of the old lies derived from fear. Fear of demons, witches, ill health, misfortune, all things people felt they needed protecting from. We don’t seem to cling to these superstitions these days in the way I remember from not that long ago, even as recently as when I was a child. Instead we have lucky things. A lucky scarf for football matches in the hope of our team securing a win, we have our lucky jacket for interviews, we may even have our lucky pants if on the pull. All of that is in the hope of attracting good fortune, rather than avoiding bad.

It’s a reflection of modern life, I suppose. For the most part, illness can be treated, natural disasters can be anticipated and the aftermath dealt with (not always very efficiently, obviously), curious natural phenomena can be explained by the appliance of science. In the main, the world is not something to be feared. And so, in the absence of fear, we allow hope to enter instead. We hope that won’t crash and burn in the Championship, hope that we will get that job, hope that tonight will be The Night. Even though we consider ourselves to be rational, educated adults, there is still a part of us that clings to hope.

Why do we do this? Why, when in the cold raking light of day, most would never admit to keeping to our private and personal little four leafed clovers? We know (at least I hope you do) that not doing something, or not wearing something will have absolutely no impact on the eventual outcome of a situation. In the case of lucky pants, I’d say that revealing a saggy, faded pair of Homer Simpson boxers, so ancient they’ve become almost crotchless is likely to significantly decrease your chances of being invited to reveal anything more. But yet, we hold on to these things. We ignore the times our ‘lucky’ charm didn’t work, and only remember the times when it did.

I could be scathing about this tendency we have. I should be. I should be logical, and rational, and I should point out how flawed our (lack of) thought process is. But I won’t. What I will say is that we cannot scoff and sneer at the beliefs of those who lived in the past, and the actions they took to protect those closest to them, to avoid dangers they didn’t fully understand. We ourselves are just as guilty, keeping things for sentimental reasons that have no root in practicality. I should say that we, all of us, have our own little set of private beliefs and superstitions, some founded in our everyday lives and experiences, some that have arrived on  the slightest of whims, but ones that we observe religiously. I should say that we ought to abandon these silly little charms, these hopes, but I won’t. Because it is those illogical and irrational acts that make us, define us, what makes each of us the individuals we are. It is our beliefs, gathered over time, careworn yet precious, that truly reveal what we hold most dear.

Not to mention that it would be utterly hypocritical of me to rubbish old folk tales too, because since the morning of 4th November 2015, I have worn around my neck a long thin piece of red ribbon, attached to which is a Spiderman button badge. I haven’t taken it off once. And although many triumphs and disasters have come my way since I first put it on, nothing has been quite as terrible as the events that caused me to first start wearing it. So on that flawed, unsound, sophistic basis, it stays. Because it has kept me and mine safe, as all charms and superstitions should. 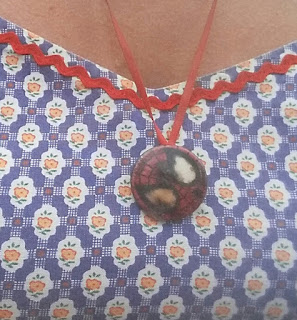