Quite a few months ago now, in what seems like a hideously distorted dreamscape of events I’m no longer certain took place; I had a Very Bad Day. One of my worst days, in fact. As bad a day as is possible, to the point that it nearly was my last day. It took someone I’ve never met to make sure that there weren’t local news reports starting with the words ‘A body has been found…’ Yeah. That kind of bad. But, as I say, a very wise man was very wise and very kind (‘and that’s how I got picked up by the Police from Beeston Priory at one in the morning’ is usually how this story ends). So, with no trace of hyperbole, I owe my life to the kindness of that person. He knows who he is. And I hope he knows how his consideration that night kept me going in the very tough weeks that followed.

There was another stranger that day too. Although I was trying to be discreet during my phone calls with Kind Man (or at least I think I was, my memory is distinctly hazy) someone on the bus to Sheringham (yes, the arse-aching glamour of my life) heard me sobbing and trying to explain why the horror of everything had overwhelmed me and my mind had splintered. And they obviously realised that they couldn’t do much to help, but as their bus stop approached, they got up, took a few steps back to where I sat and handed me a scrap of paper. 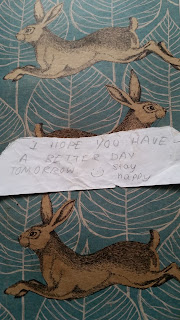 I’ve kept it. Of course I have. I put it in the notebook I had with me, and I’ve kept it there ever since. I carried that notebook with me for months, everywhere I went, although I haven’t written in it since that day because I don’t want to be reminded of the words that were spilt into it. But I did read that note a lot.

I didn’t take in anything about the person who gave it to me. Male/female, old/young, alone/part of a group. All I remember is a disembodied hand passing it to me. And me snotting everywhere because I was at the point of knowing that these were my last few hours on earth, and there would be no more days, let alone better ones.

I hadn’t planned to tell anyone about that stranger. It was just going to be a moment between us. But I sort of feel like I have to now. Because the world right now seems a bleak, empty, hopeless place. For family, for friends, for strangers. And I feel utterly powerless to do anything about it. Helpless. But I’m not, not completely. None of us are. We might not be able to change much in a wider, more meaningful sense, we can't change what has happened, nor what will come, but we can each do small things. Smiling at strangers, kind gestures, challenging people when they are casually racist or discriminatory. Stepping in when abuse is happening in front of us. We can even pass a note to someone we know is in distress. We don’t have much else, and even those small things can’t change the terrifying and uncertain present we’re living through, still less whatever it is the future holds for us. But if you see someone who needs helps, offer it. Posturing and pontificating on social media is all very well, but it doesn’t do very much to reassure people that they are welcome, they are cared about, that they matter not because of who they are, but simply because they are. Because they are, and we value that. Because they are, and we want them to be. Ignoring things only makes people feel even more isolated, before we can start to think of a way forward together. And come what may, we need to be together.

This isn't my usual stance. Normally I'd be shouting and RANTSWEARING and telling everyone just how soul-twistingly angry I am. I have been, doubtless will be again. But tonight I am just sad. Tonight I am alone. Tonight I am despairing that everything I see seems to be a relentless and unforgiving stretch of misery, bad news, and unkindness.

So be kind. Be brave. Be thoughtful. And not just to people you know, but to anyone who needs it. It will be appreciated; I can assure you of that. And to you, whoever you were, on that bus … I wish I could tell you what that small gesture meant, and how I clung to it. Because if a stranger cared enough about me to do that, then I allowed myself to dare to believe that perhaps I was worth saving after all, despite everything.
Posted by Put Up With Rain at 20:30 9 comments:

There must be some kind of misunderstanding. It couldn’t have happened the way they say. He says it didn’t happen like that. He says he didn’t do it. He says he was there, but it wasn’t like that, despite the evidence. He denies it. You believe him. You accept his version. You don’t question the parts that don’t make sense, the facts that exist. Blindly, you believe what you see, that boy you say you know. You close ranks.

You close ranks, and you absolve him of any wrongdoing, any responsibility, any guilt. You don’t make him look at himself and what he did. Easier to blame someone else, everyone else, but not the boy you know. You weren’t there, but you believe you know what happened.

Do you think you helped him? Do you think that your refusal to accept there might be some truth in what other people said was wise? Do you think that maybe if you’d considered that he wasn’t the innocent, ill-treated victim, he might have thought about what he’d done? Have you thought that people don’t often want to let their masks slip, that they lie about what they’ve done? Or are you always going to stick to your belief in the boy you know? Never doubt him, never question him, always defend him.

It is, though. And all you are doing through your misplaced sense of loyalty to your son is reinforcing that he is always going to be that golden haired, blue eyed boy who is never in the wrong. And because he’s never in the wrong, he’ll never have to apologise, never express regret or remorse. He won’t even be able to do the right thing, even now. Will you ever accept being in the wrong yourselves? Because if you don’t, he can’t. And if he can’t grow up and accept the blame, he’s always going to be that stunted little child who lies his way out of trouble every time. That selfish and entitled man who puts his needs and wants before anyone else. He will stay that boy, I promise you. That boy you know. Except that you don’t know him at all.
Posted by Put Up With Rain at 20:15 No comments:

I got it wrong, didn’t I? I’ve always said you’re tough, resilient. I never worried about you in the way I did about your brother. You’ve always been the strong one; the one who shrugged off upsets and insults, the one who didn’t need reassurance.

The problem is that you don’t like to admit it, and so I’ve missed out, so many times in recent months, on being able to give you the time and words that you’ve needed. Sometimes it’s been because I’ve just been too caught up in everything else that’s going on, sometimes it’s because your brother has got in first with his feelings and need for cuddles, but mostly it’s because you hide your feelings too well. Your real feelings, I mean. You’re never quiet, we always know when there’s a triumph or disaster unfolding, but you don’t often open up to me. And that’s my fault.

I have always believed that of the two of you, The Boy is the one most like me. Quiet, shy, reserved, so I’ve always given him more attention to encourage his confidence. He gets my time because he’s always asked for it. You never do. It’s taken me a long time – too long – to realise that you are more like me than he will ever be, because you have that sheer bloody minded refusal to depend on other people for help, and an iron will to Just Get Stuff Done. Remember that time on the climbing frame a few weeks ago? When you got stuck and panicked a bit? And I said to you, in exasperation ‘Why do you always have to go on it, when you always get stuck?’ And your reply was ‘Because I was determined I could do it on my own.’ Sums us both up…

It doesn’t have to be like that, though. Honestly, sweetheart. It’s probably a bit late for me to change too much. But you’re so young still, even as you seem to be racing through the years. It is ok to tell me when you’re not ok. I’m your mum. I want to make the world as easy for you as I can. Sometimes I won’t be able to help, but I’ll always listen. I can’t bear it when I see your face crumple with disappointment and how you turn away to hide that from me. The times when I see that you're upset, but you tell me that whatever's happened doesn't matter. You don’t have to live a life where the only person you can rely on is yourself, please believe me. I will almost certainly let you down without meaning to, because I’m just as human and fallible as everyone else, but I am here, I love you, and I will do anything for you.

I treasure every moment I have with you. The hours we spend in the grotty pub next to school, waiting for your brother to finally traipse out of whatever after school club he’s doing. The times you come with me to the shop in the evening, and carefully buy sweets with your pocket money, the pride showing on your little pearl of a face. It touches me even more that you always buy something for your brother too, unasked and unprompted. I am honoured when you give me your notebook to read a story you’ve been writing. You are a writer, my beautiful, precious girl; you have an almost unnatural talent already. I know that one day your words will change the world of other people, not just me. I am so proud of how you are, who you are, and what you will become. I’m sorry that I cry over you as often as I do, but I don’t always have the words to tell you how happy you make me.

So, today, on your birthday, I’m sorry I haven’t been able to buy all of the presents you asked for. I wish I could have done. But I can offer you something I haven’t been too good at doing up until now. I promise you that I will be a better mother to you, in that I will make sure you know that you don’t have to do everything on your own. And I hope, in time, you will give me the gift of telling me honestly your truth, and asking me to help you. 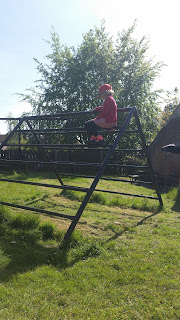