'Because it is my name! Because I cannot have another in my life.'

I was mooching about at Norwich Cathedral last week, because apparently I don't spend enough time hanging out in freezing cold medieval places of worship, taking crap photos of graffiti on my phone. I could add a few examples of these photos here, but you seem nice, and probably don't deserve that.

Anyway, as I lurked in dark corners and stalked around cloisters and reflected that I definitely do require a far more dramatic coat to make an impressive entrance (my £20 much abused Primark overcoat is fantastically warm & waterproof, but it does make me look a bit as though I'm wearing half a sleeping bag intended for someone of more generous proportions than I. Or, as my son put it 'Your legs look like two pieces of string hanging out of a sack'), I snapped a few later bits of graffiti too. Like this one. 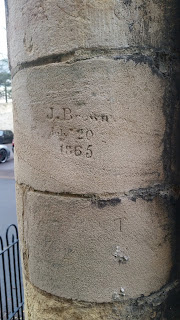 Lovely handiwork, I think we can all agree. And because it's historic, it's important, so most people assign it not to 'vandalism', but instead as a 'vital record' or 'human heritage' or slightly less charitably (and almost certainly wrongly) as 'bored choirboys/parishioners' etc. The same people who would have a fit if 'J. Brown November 25th 2018' were to appear next to it.

As we know that's – perhaps ironically – a modern attitude to have towards graffiti. As we also know (shh, you do know, I've told you often enough) 'graffiti' only entered the language relatively recently, only appearing because a term was required to describe the inscriptions being found in Pompeii during its exhumation. It held no negative connotations then, it was just a handy term for people leaving their mark.Now, of course it's anti-social and a sign of how far society has fallen. You know you live in a rough area if it's described as 'riddled with', 'covered in' or 'besmirched by' graffiti. In these times, Banksy would surely replace Pestilence as one of the horsemen of the apocalypse. Except that the pale horse traditionally featured wouldn't be pale these days, but tagged to spray-painted indecipherability, because That's The Way of The Modern World.

And it is, to a greater or lesser extent. Graffiti creators these days tend not to leave a calling card of full name, date, or anything that could be considered as personally identifying. Instead we have nameless political statements, street art created by someone whose greatest identifier is their alleged anonymity, endless tags. No one signs their name any more.

'I mean to deny nothing.'

Seriously, when was the last time you saw a piece of graffiti that was just a simple entry in the visitor book of walls, that was in any meaningful way 'recent'? A carving, pen stroke, or scrawl that actually states nothing more than 'I was here'? If you want to make a 'Kilroy woz 'ere' joke right now, please do so only inside your own head.

These days, people leave only first names or initials or tell you whom they love or hate. They make statements, or daub political slogans or tag themselves to be seen, heard, read, left for as long as their message is allowed to remain. Left behind, yet very rarely recording who they are, or when, only where. Whether passing through in a brief moment, leaving it to be seen by an intended audience, or just because it gives them bragging rights over a location. Be seen on the scene as The Young People almost certainly wouldn't term it, unless they're hipster wankers who'd say it ironically at their pop up crowdfunded start up heads up... thing.

What we don't get are things that mark out individuals, as people that future generations might be able to trace. We are always told by people these days that graffiti is antisocial. I, for once not trying to be contrary, disagree. I think it's interesting that the rise in people viewing graffiti as antisocial seems to coincide with graffiti being seen as something subversive, a little bit naughty, something to clutch your pearls over. It also coincides with people becoming more anonymous in how they choose to communicate with a wider, unknown and unknowing world.


Yet still, graffiti is created, by & for people. Still people find that texts, emails, blogs, forums, social media as a whole, is not enough to say what matters to them, not if it can be traced back to the author, if it leaves any kind of footprint that can be followed. And that's even without considering the age old method of one person making noises out of their mouth and those sound waves being received into the pink and shell like area of another. Graffiti still retains the honour of hiding its face from the world whilst shouting at it. Like a snooker player plotting the trajectory of a ball at The Crucible, the end result is what matters, not who holds the cue. Those who still leave these marks have told us what matters to them. We don't always have to know their name to understand their message.

'I have given you my soul; leave me my name!'


(yes, congratulations if you also had to study The Crucible at one point).