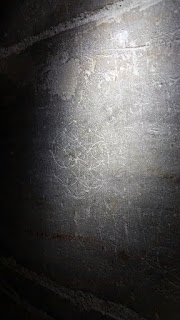 Look at that. It’s not much, is it? But whilst it certainly hasn’t changed my life, unlike another little graffito not so far away, it perhaps explains why graffiti exerts such a hold on me. I don’t get out graffiti hunting much, but I do see a lot of it and of what I see, it is the simplest finds that seem to stay with me. 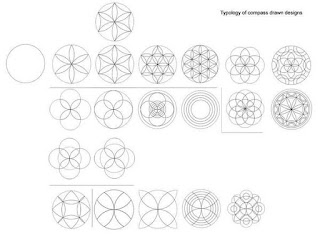 Daisywheels. If I was trying to impress you with just how intelligent I am, I’d call them hexfoils, or compass drawn designs, and wank on about principles of Euclidean geometry, but I’m not and it’d just be embarrassing for all concerned, so I’ll stick to calling them daisywheels (also because it pains some people to see them called daisywheels, and I am cruel). The idea behind them is relatively simple. Demons are all around us, stalking the earth, bringing pain, suffering and death with them. Evil bastards, basically. But also stupid bastards who are highly curious (yes, got there before you). If they come across a line, they are compelled to follow it until it reaches an end. If, however, the line is endless, then the demon must forever retrace their steps and is effectively trapped within it forever. A simple idea, a simple design, a simple solution. 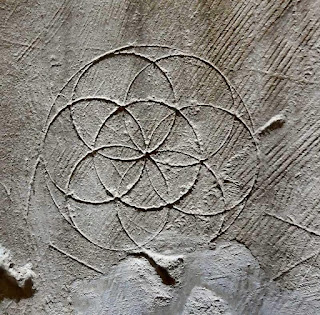 Daisywheels are one of the most common medieval graffiti finds; most people who go hunting in even the most halfarsed way will probably have found one. They don’t rank up there with the ‘WOW’ factor when you pit them against the more unusual and intricate inscriptions. People don’t ooh and aah and talk about how stunning they are, or devote time to talking about them even, because they are simple, they’re common, and to most people, they are dull. 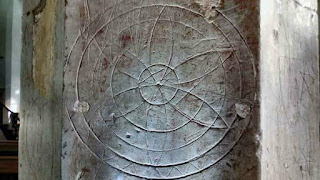 But because I am a softhearted contrary twat, I adore them. Especially the simplest, most basic design, the Tesco Value of apotropaic marks. The beauty of them is that they are balanced, whole, complete, and the intention behind them is pure. To protect loved ones from harm. To turn aside evil. They are a testament to the two emotions most likely to cause us to act – love of someone, and the fear that harm may befall them. The fact that daisywheels are so widespread and easily found bears eloquent silent witness that so many people felt the way we do now about those who are special to us. It’s not a great big shout of ‘look at me, look what I’ve made, aren’t I great?’, but instead a gentle little whisper of hope and love. Something about that bypasses my (admittedly limited) rationality and brings tears to my eyes. 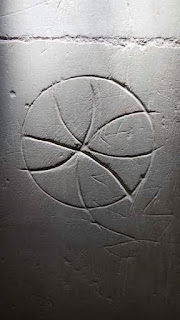 I’m such a twat about them that I even get a bit upset when I see daisywheels that have gone a bit… wrong. I imagine the horror that the creator would have felt at seeing something that had the best intentions do exactly the opposite and the guilt they may have felt if Bad Things happened, thinking that perhaps they had caused it by not being as careful as they might have been. Or the pointed finger of judginess from others that It Was All Their Fault And They Know It. Stupid, I know. I never claimed to be logical. 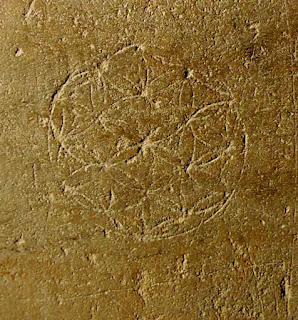 If I’m honest, though, I just feel protective about daisywheels. That people ignore them, and instead go after the big showy treasures, the impressive stuff that’s guaranteed to gain attention. ‘Just some daisywheels…’ is the disgruntled mutter of a thwarted graffiti hunter, unimpressed by the thought of a love and intention that was etched into stone centuries earlier. An intention that was shared by so many people, in so many churches, a widespread belief and devotion that we see time and time again. People overlook them in favour of the three ring circus things, in favour of the stuff that was made with the intention of gaining attention, quite often the graffiti that weren’t made with any real meaning or significance behind them beyond showing off. That leaves me cold. I’m aware that this means I’m not a true graffiti person, that I’m out of step with pretty much everyone else on this because I’d rather think about wallflowers than find a unique graffito of national significance. But wallflowers tell me more about people than almost anything else. They’re nothing special. But then most people aren’t either… except that we all are. And wallflowers remind me of that. 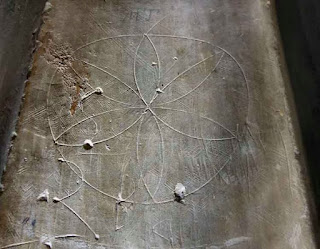