If you are a parent and you can get through that song without your eyes moistening, congratulations. I can't make it to the first chorus without descending into hideous, chest-heaving, light-headed weeping. I just can't.

Before the blondies came along, I was a fairly emotional sort of person, capable of empathy and sympathy (no, they are not the same thing). Then I became a mother. And all sorts of stuff that previously I would have awarded a cursory 'oh, that's sad', became the type of thing that tugged at my heartstrings, ripped at my mind, and made me a snivelling, tearstrewn mess. Mostly stuff in the news, songs, facebook, twitter, books, friends, complete strangers in the street, a cloud, a dirty spoon... Christ, anything. But especially the blondies. And of the two blondies, it is the eight year old who knows exactly what to do to set me off. He doesn't mean to, he has a way of expressing himself that just fucking. kills. me.

Probably because he's very like me, in that he is stroppy, sarcastic and cynical. But also sensitive, considerate and thoughtful. People who know me may be surprised to hear that – hey, I never said I acted thoughtfully, I just think, thoughtfully, in a thoughtful way. So when he's upset, I can see my eight year old self being upset. When he's angry about a perceived injustice, I see myself. When he's been wounded by a remark, I can feel that wound.

So you can imagine my feelings last week, when, exasperated, his father and I shouted at him because he still hadn't put his pyjamas on, after the eighth time of asking. His face turned red, tears filled his eyes and he ROARED 'Stop shouting at me! You're being horrible and I already had people being mean to me at school ALL DAY!' before bursting into tears and running upstairs. Knowing him/knowing me (A-ha!) I said to Alistair to leave it, let The Boy calm down. Which he did. And then he wrote something. Here it is. 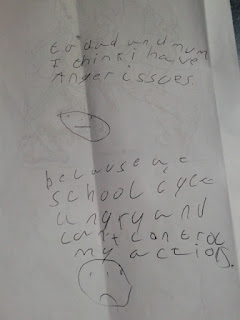 to dad and mum

I think I have Anger issues.

because at school I get angry and can't control my actions.

If you are laughing now, I can't say I blame you. My reaction was of horrified laughter (the kind of laughter you do when your friend tells you their dog has died, and you are incapable of responding appropriately), followed by tears. I kept thinking 'My boy! My precious first born! What the hell have I done to you?'. And when I told my sister about the incident, she cackled delightedly and said 'HA! You're parenting yourself!' And it is true.

For example, since The Boy started school I have been dodging questions about God, Jesus, religious stuff. I'm an atheist, but I don't want my beliefs to decide what my children believe. So for four years I have been carefully saying 'Some people believe that, yes.' 'Some people think so.' 'Some people say it's true.' Meaning that I'm agreeing-ish, but not really. Until a few weeks ago, when The Boy announced 'God, Jesus and all that stuff. It's all completely made up, isn't it, Mum?' I replied 'Hmm, why do you say that, darling?' He fixed me with a weary look, and in withering tones, said 'Err, dinosaurs? Dur.'

Then there is the matter of his sense of humour. I have allowed him cautious access to some carefully selected Monty Python and Fry & Laurie. And he loves it. Cannot get enough of it. He quotes it on the way to and from school, and the shameful part is that I join in. Whereas Alistair had never heard of Monty Python until he was twenty and going out with me (I still cannot understand how someone can lay claim to British citizenship and not know about Monty Python, but that's a whole other story). We giggle together ferociously, heads bent into one another, while the five year old blondie dances down the pavement obliviously, singing to herself (or shouting BOGIES! at passersby (she is self-proclaimedly mad as a box of frogs, I'll tell you about her another time)). Alistair was a bit concerned that I was allowing The Boy access to things that are best left until he's older. I pointed out that when I was eight, I was reading my dad's copies of Viz, watching An American Werewolf in London and could quote verbatim the entirety of Life of Brian. Alistair wasn't so bothered after that, I mean, I turned out ok, right? Right? RIGHT?

And he loves to read. Anything and everything, he devours books in much the same way Alistair devours chocolate (can eat two massive bars of Dairy Milk in a single sitting). I can remember being such an addicted bookworm at that age that when my mum banned me from reading books at the breakfast table I used to line up the cereal packets so I could read them instead – that's totally normal, right?- and it looks like The Boy is heading the same way.

And then our joint shopping trips. We don't do it very often (it turns out that not working for three and a half years can have a disastrous impact on your finances), but when we do... This weekend I introduced him to the delights of Head in the Clouds, the UK's oldest head shop, and the place where I spent most of my pocket money from the age of six upwards. The Boy fell in love, instantly, violently, dramatically in love, from the 40p badges, to the skull scarves, the rainbow candles, the rolls of stickers. And when we left, I had purchased red hair dye, and he had purchased blue hairspray (he wants to dye a blue streak in his fringe, and I am being a parental killjoy by insisting on something temporary).

So we're close, me and The Boy. Very close. Every morning when I drop him off at the school gates we hug for a minute or two, say that we love each other, kiss, hug, wave. Then he always turns around and makes the heart signal with his hands, and I do it back. He's completely unselfconscious about doing it, and will do it in front of his entire class.

But, and this is what chokes me, one day he won't. One day, he won't want a hug and a kiss, he won't want to be seen with me. He won't giggle at me saying 'Ed Balls', or ask me to pull a stupid face just to make him laugh. He'll shrug off cuddles, ignore requests for a goodnight kiss. We'll no longer compete to see who can hold a silly note for a stupidly long time (I win, always), or leap out at each other shouting 'RAH!' to try to scare the other person. He won't come into my bed when he has a bad dream, or rub his cheek against my arm for comfort. He's getting taller by the day and I can no longer carry him upstairs if he falls asleep on the sofa. He's my little boy, but he's growing up and I'm not ready for it.

Just gorgeous. My eldest is a (male) mini-me too, and I just want to scoop him up (not literally, he's enormous) and leapfrog him over all the growing-up crap I know he will have o go through. While wanting him still to be my pyjama-clad dreamer forever, obviously.

Slipping through my fingers: abso-bloody-lutely *sobs*

'pyjama-clad dreamer' - that is such a lovely, evocative phrase!

I feel like I have to store up all the hugs and sweetnesses now to sustain me when he's older. And I'm going to have to go through this with the mad 5yo too.

Excuse me, I'm just off to listen to Abba for a bit...

Loved it. It made me teary eyed... My eldest is more my husband than me, but I still see some glimpses of myself when I was younger, and still I look at him with bewilderment - when did he manage to grow up so much without me noticing it?!

Thanks Orli! I think what triggered this was when The Boy fell asleep last week and I could barely carry him. And the realisation that his head is level with my shoulders - he's only going to get bigger!

This really rings true for me, although my male mini-me is only 3. My daughter is much more like my calm darling husband, and I love her so much for that too! My son presses my buttons like no other person on earth (bar my brother :-)) but we 'get' each other and I just love his company.
Glad to hear of another Fry and Laurie fan! Do you also think of 'Mystery' when you hear Hugh Laurie's new incarnation as a blues singer?!

It's an odd thing that our sons seem to be so much like us, but it's also very comforting. Not looking forward to the teenage years though, as I was an absolute HORROR.

I was a horror too... My poor mother! I'm getting karma now! My little lad is off on a field trip tomorrow and is so excited he couldn't sleep for ages... We could hear him whittering away to himself like a budgie. It's at times like that when I feel my heart could explode, it aches so much. Bloody motherhood and Abba and crying at anything.
Anyway, nice to meet you and keep up the good work.. I will now need go watch the 'on the streets with Bibby' . And possibly Life of Brian.

This post totally hits home for me. I know what you mean. In a blink of an eye, my boy is now 5 years old. Kids grow up so fast, don't they? And they have the darnest comments. Love your little boy's card btw. Hee. :)

Thanks Marie! It's been a wake up call for me to cherish all these memories, because I don't think he'll still be making heart shapes at me when he goes off to uni...oh god, uni.