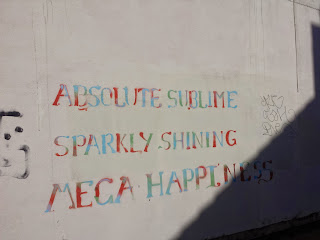 I say I’m a ‘bit obsessed with graffiti’. I may be slightly underselling my feelings there. I’m more than a bit obsessed. I am consumed by it. It started, a these things do innocently enough, with a bit of light reading and the odd like and retweet. I liked it, but there were other ore pressing matters at the time. Such as a blog about how my face melted in a sauna in edgefield once.

As we know, my feelings changed. Quite quickly. Not overnight, but overday, to be honest. Something shifted, clicked into place and I got graffiti. It made sense to me. I felt as though I’d become fluent in a new mother tongue. I hadn’t, as I now cringingly realise. With the zealous passion of a neophyte, I made pronouncements, went off on half-cocked tangents and made probably more mistakes than things I got right. They’re all out there somewhere still, testament to my early excitement. I could go out and cover over those errors and embarrassments with the handy ‘delete?’ button, but I think we usually learn better from our mistakes, so have something of distrust for those who maintain a façade of faultless, blameless perfection. To err is human, to deny that is be dead behind the eyes. It’s instructive too, to go back and see the younger me, on the right track, trying out this new language, even if my lack of knowledge meant that sometimes my hovercraft was full of eels.

But what graffiti meant to me then, and always will, is communication. It’s the impulse that causes someone to create it, whether that’s medieval daisywheel, a 17th century memorial, or a tag on an underpass. All graffiti is created with the intention of being seen. That is the entire point of it. If the person making their mark didn’t intend for it to be seen by others, they wouldn’t do it in the first place, it would remain only a thought, a wish, a prayer even. I’m always wary of over interpreting things (which isn’t to say I don’t overthink EVERYTHING), but even the smallest, most plain and mundane graffito was created with feeling, by someone. For someone specifically? Perhaps. Possibly. Potentially. But always for an intended audience, whether as one individual to another or just as a message wider, unknowing and maybe uncaring world. 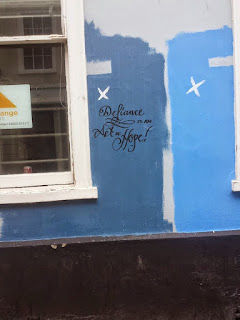 The thing to remember though is that attitudes change. The word ‘graffiti’ wasn’t even coined until 1851, which rather suggests that before then it wasn’t needed. But it certainly existed before then – because the word came into being to describe the inscriptions that were being found on the walls of the newly discovered . But until that point, graffiti had been considered as unremarkable as to almost never be remarked upon. And yet it was there, seen, registering with an audience, whether they were the direct targets or not, for as long as humans have been able to write and draw, they have left their ideas behind on the walls. We celebrate the historic graffiti, painstakingly record it, pin the butterfly to the board… but how much do we really think about those who created it and what they are still trying to tell us now? There is a story behind every graffito, it’s never mindless doodling or just a coincidence that it happens to be there.

Graffiti today is considered unwelcome and illicit, something destructive and bad. That's precisely why artists create it in public spaces, people who feel sidelined, who feel out of kilter and don't feel that they have any other outlet to express their feelings. Whether they do it to claim  space for themselves, or to express their contempt for other people, whether they do it to be provocative, I can't claim to know. But their intention is to be seen, whatever the motivation. It's done to be provocative - either to create moral indignation at the fact that it exists, or a message to make the audience think. Creating it in any space is seen as naughty, subversive, and antisocial. But could anything be more personal, more touching, more human than the need to communicate with others? To leave a speech mark without words in a language everyone can read, but few seem able to understand? 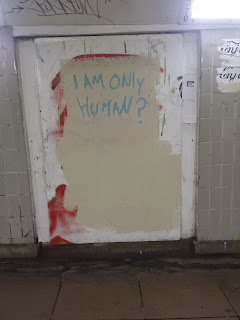