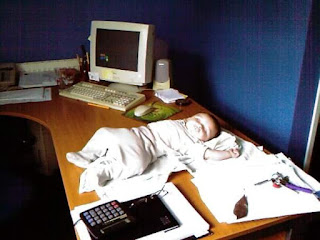 I’ve always had a desk. Always. From the rickety little wooden toy school desk with lift up lid & fake inkwell, to the vast mahogany expanse of my teenage homework years of paper pile ups, discarded ink cartridges, and abandoned glasses of Ribena, the boardroom table of my first years in employment,  which dominated my office to the extent that no other furniture would bloody fit in the room, on to the flat pack laminated cheapy naffness of my 20s & early 30s that may also have been used as a babychange station for The Girl at times, and then finally, a much beloved bureau belonging to my parents that sat in the corner of the living room in my last home.

Now, when I remember that desk, I feel guilty for not appreciating it more. It was a beautiful thing to look upon, golden walnut wood and black leather, with space for my laptop, notebook and a glass of wine cup of coffee. It had useful little shelves at the back to put photos and notes and special sentimental items (also, handy for The Blondies to stuff sweet wrappers and Chupa Chup sticks and bits of paper and all other sorts of fluff and crap I’d discover lurking on  the rare occasions that I deigned to flap some polish around). I did all sorts of things from that desk. My first real attempts at writing. My first tweet. Sitting at that desk, I made friends, had arguments, discovered things I’d never known, I opened up my world to a new perspective and understanding. I sent happy emails, sad ones, angry ones, silly ones. I saved photos and paid bills, I organised things, I changed the course of my life irrecoverably on so many occasions, sitting quietly at that desk in the corner over the space of four years. And I never really considered the desk at all. It was just there, being a handy piece of furniture that was useful in every area of my life.

But it wasn’t mine. So when I moved, it did not. And in the general complete pigfuck that was the process of moving house, I had to jettison several items that could easily have been pressed into service as a flat surface on which to write (moving was a complete disaster. Maisie’s slightly quirky in that the front door is upstairs, meaning that all of the furniture for living room had to be taken down the very tight and winding spiral staircase. Or not, as it transpired, because hardly any of it would fit. Seriously, I lost all of my bookshelves, my beloved Indian dresser - the first piece of furniture I ever bought – my gorgeous six foot pine antique dining table… and then the crowning glory of not getting the sofabed down the staircase to the living room, which is why it got dumped in my bedroom instead, and I’m still sleeping on it now, a year later, and god, moving was a disaster. It should have taken three hours. It took nearly seven).

No desk? No problem. I’ll just use the kitchen table instead. Except that the kitchen table is a bit dodgy and has two wobbly legs. Fine for sitting and eating at, but rather unnerving when you’re typing away furiously, and the table lurches away and to the left of you as though it’s about to collapse in on itself, meaning you have to leap up and hold your laptop aloft every few minutes. 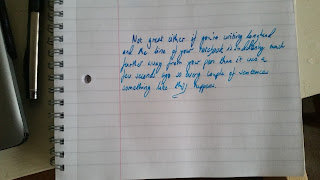 Oh, and wifi in the kitchen is rubbish, so communication with the outside world is curtailed every few minutes, which is hugely frustrating and rather like living in North Norfolk.

I thought I’d found a solution. The coffee table in the living room. Sturdy, hardwearing, dependable, and unlikely to develop an aversion to being close to me. Only problem is that it’s about 30cm off the floor, so to ‘sit’ at it, I had to arrange a couple of cushions on the floor and lean against the annoyingly prickly wicker sofa. Ever tried sitting like that? It’s fine for an hour or two. But adopting the same position for hours, day after day, for months at a time gets trying. It’s never wholly comfortable, leaves you with an aching back, pins and needles, and a persistent feeling that things could somehow be more enjoyable. A bit like a rubbish shag, to be honest. 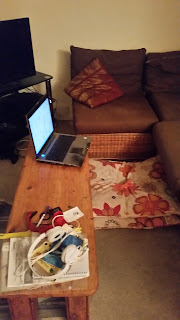 And because positioning myself like that became such a chore, writing stopped being enjoyable too. The only times I did write anything was in my notebook when I was in the pub, but the thought of then having to drape myself across the floor to transcribe those ciderfuelled scribbles onto my crappy laptop on a narrow table that was usually covered with magazines and books and craft projects and games and toys by The Blondies… It was just dispiriting, and made me feel like I wasn’t using the table so much as banging my head against it. But there was no other space in the house I could use. So I wasn't writing. And when I'm not writing, I'm... frankly awful. And the longer I went without writing, the more unhappy and full of doubts I became and felt as though I was never going to write again. Or, if I did attempt to write something, it would be utter shite. The world does not need more shite writing, trust me. There are already far too many people who can't even type a coherent sentence, let alone a piece that ebbs and flows and is funny or clever or thoughtful. I should know, I seem to end up reading most of their output and twitching as I do so. I felt like I couldn't even hoik my judgeypants at them though, because at least they were writing and being read, shared and valued. I wasn't even managing to come up with a single idea. I was sodding miserable without writing. 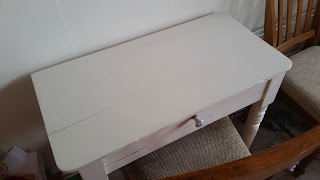 Until last Tuesday. When that arrived. A desk. My desk. Mine. And it might not look like much to anyone, and it’s small, and it’s fairly plain, and inoffensive, but I love it. The first time I sat down at it I felt this ridiculous rush of happiness that made me laugh out loud for the first time in too long. It may seem such an insignificant thing, but it means the world to me. Not least because on the surface of it are ghosts of writing past. Tiny little fragments of words that have been written into the very fabric of the wood by another’s pen, pressing slightly too hard on the soft pine. ‘ighton’ and ‘what is PE?’, marks of doodles and zigzags, a deliberate graffito into the desk of ‘I heart B’ and hundreds and hundreds of jumbled up hours of other peoples lives and stories and homework and letters and admin and idle moments and times when inspiration  struck and days when despite staring out of the window for hours, not a single thing got done. All of those marks are there, from people writing at this desk, people making their mark. Perhaps, now that I have a desk, my desk, their desk, our desk, I can start writing again too. And make my own mark, in one way or another. 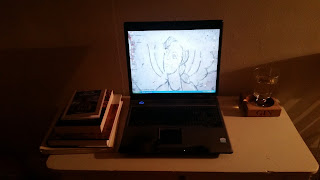