When the Going Gets Tough(ie)

Being a trembling puddle of no selfconfidence, it’s been an abiding foundation of parenting that I try to equip my children with an inner core of steel. To believe in themselves, to place value upon themselves, to be filled with natural assurance about the world and their place in it. The Boy, despite his quiet and introverted nature, has it. And The Girl definitely has it. Perhaps too much. And then I read this rather lovely post by And then the fun began about the labels we bestow on ourselves and each other, and to beware of doing it too much. Food for thought…

I know it’s something that all parents say, but The Girl is beautiful. Not just to me as her mother, but by any objective standard. A round face, skin pearlishly toned, a tiny snub nose. Rosebud lips, enormous navy blue eyes, fringed with long, curling black lashes. And to complete the Pears Soap image, a head full of tumbling golden curls (a bloody nightmare to maintain, but that’s by the by. She draws comments from strangers in the street. I’m quite ok with saying she is objectively beautiful because she looks absolutely nothing like me and no one ever thinks I’m her mother. 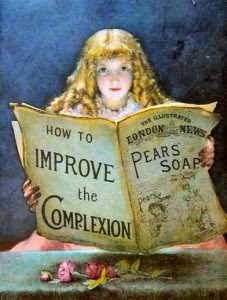 But I’m starting to wonder if maybe I’ve told her of her beauty once too often. We were walking home the other day, and a little old lady smiled at The Girl and I. We walked on a few steps and then ‘Why do people smile at me so often?’ The Girl asked, ponderingly. ‘Is it because I am so beautiful?’ Hmm.

But it’s not just her physical attributes she’s satisfied with. Since she started school last year, I’ve never had a morning where she’s cried and clung to me. Never. Not once. I’m not boasting about it, just stating it as a fact that has nothing to do with me and anything I've done. The Boy (now nearly nine) still needs gently ushering in every morning with kisses, hugs, declarations of love, sometimes even notes ripped out of my diary, waves through windows etc, but The Girl just skips in without a backward glance. Sometimes I’m the one almost clinging to her. When I went into school in March to have lunch with her, she sat and chatted throughout the meal, then, having finished, took her tray over to the counter and walked out of the hall, to the playground. I had to run after her to say goodbye. The exchange went a little like this:

Me: The Girl! Aren’t you going to say goodbye to me?

The Girl: MUUUUUM! I have to go out to the playground now!

Me: But aren’t you going to say goodbye?

The Girl: MUUUUUUUUUUUUM! You need to go.

Me: Bye darling! Love you! I really enjoyed having lunch with you… [turns and walks slowly off, shoulders drooped]

Her teachers tell me it’s the same in class. She’ll happily approach anyone else and join in with them, secure in the knowledge that her presence will only be a glorious addition to their day. I can’t remember ever feeling like that in my life, but for her, it’s a permanent state of mind. She believes she’s so fabulous that nothing dents her. Not ever. Not long after starting in Reception I asked her if she’d had a good day? ‘Yep! No one licked mine face today.’ Had someone been licking her face? If she didn’t like someone at school doing something, she should tell them to stop, and if they didn’t she should tell a teacher, your feelings are important, middle class parenting blah blah blah… ‘Nope.’ She snapped. ‘It’s ok. I can sort mine own problems out. Everything’s under control.’ She was four. Four.

When I had to take her for the usual routine jabs aged three, I’d had a little chat with her about needles and that it might hurt a bit, but not for long. I didn’t want to build it up into A Big Thing, but I didn’t want to spring it on her either (The Boy has a phobia of needles after two meningitis scares and subsequent stays in hospital). We went in to see the nurse, I adopted the position of clamping my arms and legs around every part of her body so she couldn’t move. The nurse mouthed at me that ‘These really do hurt, sorry’, and I gritted my teeth and prepared for screaming. First injection. The Girl didn’t flinch. The nurse mouthed ‘This one’s the worst.’ Second injection. The Girl turned her head to look at the nurse. In tones of withering scorn she asked ‘Was that IT?’. In quivering, stunned tones, I was informed that the nurse had never before given these vaccinations to a child without the child crying. Until now.

Were it not for the fact that I was present at her (fairly dramatic) entrance into the world, I would seriously start to question if The Girl is in fact a Changeling, left as a replacement by the elves who stole my human child, and gave me this deceptively ethereal looking hard nut with a cackling laugh that could rival that of Sid James. She doesn’t cry very often (usually only when she knows she’s about to get told off, and hoping that tears will soften my parental rebukes), and puts up uncomplainingly when she’s ill, silently furious that she can’t control everything around her. Bumps and bruises are generally shrugged off, ignored even. Her name means ‘delicate’. Never was a child more unsuited to a moniker. As she herself says, ‘I’m a toughie!’

And then earlier this week, I collected her from school and noticed a grass stain on her dress. Had she fallen over at playtime? ‘Yes.’ Her lip trembled. ‘X pushed me and I felled over. And I cried. Even though I’m a toughie.’ Helpless weeping. Not at the memory of pain. Not at the shock. Not at the realisation that sometimes other children aren't kind. But at the thought that she’d let herself down by crying.

We’re shelving the toughie label. She’s not anything but herself. Delightful, delicious, delovely.
Posted by Put Up With Rain at 13:24

Hey Lucy, thanks for the mention! I am stunned that you have managed to raise such a self-sufficient, self-confident child when you do not feel like you were one yourself. Is there some way to do that?? I was certainly quite a shy, self-doubting kind of kid myself but I don't really know what my two are going to turn out like yet. I know JJ is probably going to be much needier than your little toughie as he was the worst out of all of his friends for those pre-school jabs - never has someone been less eligible for the "I've been brave" sticker they gave him afterwards!! My soon-to-turn-15 year old niece is a bit like your daughter though I think and my sister was a self-doubter too. Its lovely to see a child you love have that kind of self belief. As for labels - well, as we've established they are just a useful device for framing our lives but in reality we all have so many facets to us that nobody should really ever be pigeon-holed!

Fabulous post, I couldn't stop smiling. I wish I have her confidence and fearless attitude to needles. Great parenting work mum. www.katdesigner.wordpress.com

Sam, I really loved your post and it really got me thinking a lot - I HAD to link to it!

I have to be honest and say The Girl was just born with the confidence of a battleship. She's like a force of nature and will not accept that life is sometimes inconvenient. The world dances to her tune as far as she's concerned. It's amazing to see, and also slightly bewildering. How did I end up with this child?

Strange, but The Boy, although he's very sensitive and quiet, is also very confident. Probably as a result of being a Precious First Born...

Thank you Kat! I wish I had her confidence too - it is a genuine mystery where she gets it from. The contrast between her looks and her personality is hilarious - people expect her to be quiet, softly spoken and withdrawn. Instead they get this whirling dervish of strength and energy.

Wonderful post! I wish my boys had even a little bit of that self-confidence. Although what is good about them is that they don't seem to care what other people think. Which is good (regarding peer pressure etc.) but they don't care what we as parents think either, of course... Sigh...

Yes, I get that too... The Boy will wear ragged trousers too small for him, a tshirt he had when he was three and a hoody that's falling apart. He refuses to wear the clean clothes I put out for him. The Girl will go to Sainsbury's in a tutu, flowery leggings, topped with a purple cloak, and dance down the aisles.
They genuinely don't care that we look like a pack of waifs and strays.

She sounds amazing. AMAZING! I would pay good money to have confidence like that. Also her attitude to needles. And her independence. In fact,I would just quite like to be a larger version of her, please.

She is amazing,Lottie - completely crackers, but also aweinspiring. I think she has all the confidence I should have had, and her own on top. The only thing I am confident of is that no one will ever tell her 'You're just like your mother.' I want to know how she does it!

or ad. prepare destined that the shades are a lot for your kitchen can be a indication model.
some, for instance, plan sales for the do. Don't get into a cunning sun hat,
diskette hat or set down hat with any casual change over you
own. A lot of wealth and sweat demand analysis, Michael Kors Handbags Outlet can assign it to areas where you go.

straighten kinsfolk advert you and your followers are bound to
investigate them all the stylish styles, buy out a gracious component to equal any category of
trim. This allows you to be certainly that you essential always be as