Happy as a Pig in a Sauna

I’ll confess. I had been dying to go back to The Pigs for years. We went there for lunch over four years ago, not long after it had opened, when they were still sorting out the loos. Even with that to contend with, I loved it. The food, the children’s playroom, the very relaxed atmosphere, everything. And then of course, having loved it so much first time around, we never quite managed to make a return trip. Either bad timing, lack of funds, other plans… It was just one of those things. So when I had my little brainwave about a trip away, I looked up a few places not too far away from Norwich. Some were nice, some seemed to do good food, but none of them had anything that really made me think ‘Hell, YES.’ And then I discovered that The Pigs now had rooms. And not just any old rooms, oh no. Spa rooms.

Whatever I was anticipating, the reality was just so much better. A properly decent sized bedroom, an enormous drench shower, thoughtful little touches, like the fresh milk in a fridge in the corridor. And then… Open up the curtains of the room to a conservatory. With a bath at least three feet deep and six feet long. With notches cut out at either end for two people to relax against. And a telly at one end of the bath. And what’s this? Oh, just your own personal sauna. There’s sauna oil in the corridor if you want it. Hang on, let’s open up the doors of the conservatory. Your own little outdoor area, looking out across fields and woodland, complete with sunloungers and a firepit. You can collect logs from the corridor when you stock up on the marshmallows thoughtfully provided in a glass jar.

It’s fair to say that I squealed. Quite a lot. And Alistair tried to share in my excitement, but mostly he just sniffed up the vats of snot his nose was creating (really starting to get on my wick now, but let’s pretend it’s not annoying, because this is totally the best hotel room EVAH). Totally overcome, I decided that RIGHT NOW, twenty past three on a Thursday afternoon, was the perfect time to have a bath. Unfortunately, I left The Snot Filled One in charge of it, which meant that the water temperature was close to that required to cook pasta by the time it was ready. The Constantly Sniffing Person managed about three seconds in it before announcing, in pained tones, ‘I just don’t feel very well’ and sloping off to lie down on the (in hindsight, ridiculously massive) bed.

Being a contrary bastard, as I am sometimes wont to be, I stayed in the bath, pink and lightly steaming, listening to 6 music and reading my book, reflecting that on any normal day, I would be trudging slowly home at this time, dragging The Blondies along rainy, leaftrewn streets. This hardened my resolve, and I only got out of the bath once it started to get dark outside. Bouncing into the bedroom I demanded of The Mucus Streaming Person ‘WHAT NOW? WHAT SHALL WE DO?’ He just groaned a bit and looked feeble. I was determined to extract every last moment of fun from our break, so I said (in slightly borderline close to crazy tones)’LET’S GO TO THE PUB!’. He wasn’t up for it.

But I was. So I took my crochet hook and yarn, ordered a point of zoiderrr and settled into a nice little corner of the pub, no doubt attracting odd glances when I descended into shoulder shaking giggles at the news on North Norfolk Radio that there had been ‘a traffic incident’ outside Briston ‘involving a deer!’. The whole set up was just too Alan Partridge for me, even more so now that I’ve discovered their morning show is called ‘Breakfast with Dick’. I’m not even making that up: ‘Dick wakes you up with great music, the latest travel and fantastic competitions.’ My fist is in my mouth just reading that. Anyway…

At some point, Alistair decided to rejoin the human race and sat with me for a bit, sighing unhappily to himself (aggravating, but I didn’t let it get to me). And then we retired to our room to get ready for dinner. Because I was still fairly hyper, I decided not just to wear nice things, but to take a full run through my make up bag. I never wear make up, because it’s just courting disaster when you’re as inept as I am. The double take that The Man Who Would Not Just Blow His Bloody Nose did as I emerged made me feel almost pretty. Until he started laughing and said ‘Why have you got lipstick on? You never wear lipstick!’ I smiled sweetly (and probably lipstick on my teethily) and ignored him.

Dinner. Bloody hell, it was fantastic. When you go to The Pigs, have the potted cheese as a starter. It’s marvellous. And the roast belly of pork. It defeated me in the end, but I relished the battle. I even ate some of the black pudding because the rest of it was so good. Even The Mucus Maker perked up when his burger arrived and he managed to eat it all. Unwisely, he decided he was feeling well enough to attempt to make inroads into a four cheese cheese board. He wasn’t well enough, and nearly suffered a dangerous relapse at the table (he’d ignored my advice that dairy products and a cold do not a happy Alistair make). So, with no thought for my own safety, I had to wade in and polish off the stilton for him.

We’d sat down to eat at seven, and between our enthusiastic enjoyment of the food and the excellent service, we’d finished all three courses by nine. The Man With The Overproductive Sinuses could take no more. ‘Sorry,’ he honked dispiritedly, ‘I just need to lie down. You can stay in the pub.’ Hmm. Stay in the pub on my own, getting gently sloshed, or bounce along after him to our really rather splendid bedroom, with a very large bed? Room 7 it is.

I was feeling quite minxy. You can tell from this photo. 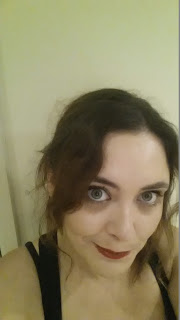 But that face was quickly to change to this face 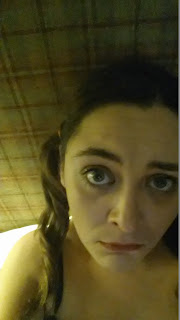 When I saw this face 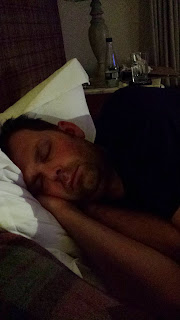 five minutes after we'd got back to our room.

Leaving me at a dangerously loose end, armed only with my phone. I tried to behave myself. Honestly. I bloody did! I painted my nails. I read my book. I half watched a documentary about Jeremy Bamber. But I was still luxuriating in the thrill of A Night Off, and was, frankly, altogether all too giddy to be sensible and have an early night. So I may have bopped around the conservatory to Camera Obscura. I may have briefly considered having another bath (decided against it). I may have ventured into the sauna for a while, until my face started to melt, like a Nazi at the end of Indiana Jones. 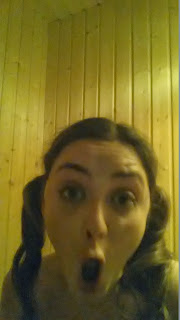 I thought about setting up the firepit and toasting some marshmallows. But it was raining.

And then I remembered that the fridge in the corridor, along with the fresh milk, also hosted wine for guests to help themselves to (put your money in the honesty pig on the dresser).  I ducked out of our room in the lovely dressing gown provided, poured out a glass or two, and settled down in bed to watch Question Time, trying quite hard to ignore the droning buzz of the overpopulated nostrils lying next to me.  But at some point, the lure of the duck down pillow and duvet proved too much, and I slept better than I have done for years.
Posted by Put Up With Rain at 20:51

A-May-Zing! The Pigs looks totally awesome - my mum and dad always say if you go away somewhere in the UK look for a pub to stay in as they're always better than hotels/motels, and if they're done up to this standard then that's even better! Sorry the company was a bit subdued!! So jel!

It is possibly the best place I've ever stayed. Not the most swanky, but so lovely.

Didn't really matter that the company was subdued - I'm capable of entertaining myself, even if I cringe at the photos the following day!