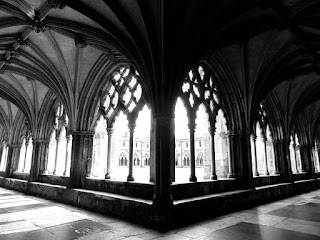 I was going to write this post anyway, but yesterday, serendipitously, a new twitter account appeared in my life - http://changeminds.org.uk/    It looks like an absolutely fascinating project, using history and archives to help support people with mental health problems who also face other challenges. Please do visit their website to find out more, and follow what looks to be a very interesting project.

I know what you think, but trust me, I’m not really like that. I know I come across online as sweary, ranty, outspoken, fierce, and PRONE TO CAPS LOCK. I’m really, really not, not in real life. In real life, I’m desperately shy, quiet, and timid. Meeting new people is utterly terrifying, and to be avoided at all costs, and when I do see people, I tend to be utterly lovely. Or, as one person put it ‘You’re an awful lot nicer in person.’

It used to confuse people, when I was younger and did a lot of theatre work, that I could be so utterly insignificant and yet never experience a pang of stage fright ahead of a performance. To me, it’s obvious. When I was acting, I wasn’t being myself, wasn’t using my words, wasn’t even falling back on my usual mannerisms, I was playing at being someone else. To stand up and perform someone else’s words? Easy. But standing up in front of two or more people and delivering my own words and thoughts? Not a chance in hell.

Public speaking does tend to be one of those things that divide people. For some, it’s straightforward, easy, doesn’t ever give them pause for thought. For most though, it’s the kind of thing that makes one want to climb inside a filing cabinet and never, ever come out, not even for oxygen. I’m very much a filing cabinet dweller, and have become even more so over the last few years. I’m not even very good at being sociable in the school playground. Partly I suppose it’s because your character tends to become more fixed as you get older, but also because of the ups and downs of the last ten years. Never confident in any case, I definitely have a tendency to retreat, and hide, silently, not making eye contact, until people have left and the danger of speaking has passed.

Which is why Saturday was a leetle bit surprising, for any unfortunates who have encountered me in my fully 3D form. I wasn’t just out in public, talking to people. I was giving guided tours of the medieval graffiti at Norwich Cathedral to groups of complete strangers, as part of Heritage Open Days. 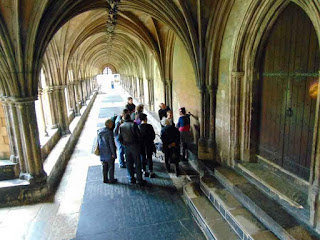 Yes, that’s me, on the right (and yes, I know, my ‘look’ in as much as I have one is best described as windswept and interesting). Me. Standing, torch and laminated A4 photos in hand, gabbling on enthusiastically about medieval graffiti and history and meaning and people and answering questions and attempting to make people laugh (some did!) to groups of people whose ages ranged from three to mid-seventies. And not only was I doing it, but I [drumroll and triumphant fanfare] volunteered to do it. I’d had a day shadowing a fellow guide on Friday, chipping in now and again. But on Saturday, it was me. Just me (with a glamorous assistant on hand to stop me from accidentally dropping all the laminates and having them slither across the floor in every direction).

I suppose the main question is why/how/what/who/you’re not as brown as I thought you’d be/did no one tell you that you look like you got dressed in the dark? It’s quite straightforward, honest (for me, precious little is straightforward, so cherish this).

You know I love graffiti, all of it, most especially medieval graffiti. It’s been nearly two years since I was reminded of thatlittle ship up at Salthouse, and   since then… it’s changed my life. It’s become a passion, an addiction, a companion, a quiet little process ticking away in my mind for so much of the time. I feel very connected to it, and to the people who created it. More than that though, I’ve got to know some of the people who are part of the medieval graffiti survey, I’ve started to feel a part of the group, some of those involved have become friends, good friends. And the little contribution that I’ve made has been appreciated. I can’t tell you how much confidence that’s given me, to feel as though I had something to offer to a project I care so much about. In a rare example of a virtuous circle, giving me that confidence has inspired me to want to do more, to share the simple wonder and beauty that I’ve seen on the walls.

And how do I do more? How do I spread the word, and get more people to want to explore it too? I can blog about it, that’s easy. I can retweet things, and share posts on facebook. But the best way, really, is to lead off a group of ten people and grin goofily at them as I point out ships, and daisywheels, and curses, and faces, and all those faint little etchings on the walls. 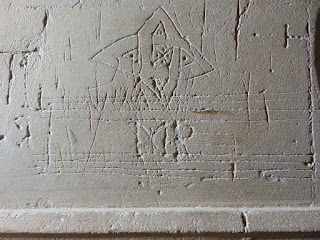 I won’t lie, I was absolutely petrified. My first stop on the tour was this medieval music. Easy enough to point out. Except that it isn’t when your hands are shaking, your throat is dry, you drop your laminates, and when you finally manage to speak your voice has been replaced by that of a boy on the cusp of puberty, and all intelligent thought has vanished. But I did it, and as time went on, I actually started to enjoy it. I felt confident in what I was saying and doing. I doubt I was very good, despite the generosity and goodwill of my audience, but I still did it, I got through it, and best of all, as dear sweet Project Director Matt Champion said to my first group ‘Well done! You…. SURVIVED!’ (Yeah, going to be having words with him about that).


I’m still on a bit of a high from it, to be frank. To actually get people involved in something different, something new, have them make connections between then and now, to have the opportunity to share something with people. I know that to a lot of people, it barely merits a shrug or even a second thought. But considering my history of mental health problems, my natural introverted personality, and utter terror of speaking to more than one new person at a time, I’m proud of myself. Not something I allow myself to feel very often, or even to say to anyone. But I am. And I’m even prouder to be a part of a project that’s done so much for so many people. So often, when you have mental health issues, you can feel very isolated. Medieval graffiti has made me feel part of something. 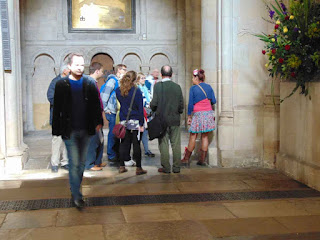 Jess, as you know I have witnessed your transformation and I am proud of you. From your first cathedral survey when I almost had to push you in the direction of visitors. I remember you saying 'I can't'. And my reply was, 'yes, you can. Grab a torch and show the visitors the Tudor Man'. And bless your little cotton socks you did it. Now look at you. Leading your own tour group. Keep up the good work, inside that shy exterior is a lovely loving confident person. A big CW hug. From you know who xx

I am so pleased that you have found your place in the world & thanks for the goosebumps I got whilst reading your touching blob.

Really enjoyed your blog - you're an inspiration. Looks like that group were lucky to have you to lead their tour round the graffiti.

I was so nervous that first time that I was too scared to even ask to borrow a torch! Your encouragement has meant so much to me - as has your generosity and support. Huge CW hug back to you xx

'My place in the world'... what a perfect way of putting it. It really does feel that way, doing something I love and being able to share it with others. Thank you :-)

Thank you! I really hope it encourages other people to think about getting involved in projects and volunteering - it really has changed my life. And I was very lucky to have such friendly people to show around!

Thank you! And a quiet riot, obviously ;-)

Thank you Sam! Hope people enjoyed it as much as I did xx

Brilliant.. thanks for sharing your experience. inspiring.

Thank you David! The power of archaeology to inspire and change lives :-)

Lovely to read this! Enjoy and carry on enjoying x