Today is The Boy’s ninth birthday. Nine years since a freakishly quick labour resulted in a tiny, wasp-waisted little person being placed on my chest whilst I quavered in previously unused Joyce Grenfell tones ‘My baby! My baby!’.

It’s been emotional. In the very early days of being pregnant with him, I remember passing a primary school and seeing the children running around the playground. I had a sudden realisation that This Shit Just Got Real. One day I would have a child doing exactly the same things as those children. Jesus. Pregnancy was a bit of a blur after that, until I woke up at 04:11 on Sunday 16th January 2005 and realised ‘Oh. Fuck. So this is what contractions feel like.’ For the only time in his life, The Boy was in a hurry, and arrived dead on 07:00.

I still remember how the midwives were trying to urge me to take him home within two hours of giving birth and I looked blankly back at them thought ‘What? You mean I have to look after him? Don’t I have to pass an exam or something first? Don’t leave me alone with him! I’ve got no idea what I’m doing! I’ve never even changed a nappy!’. They begrudgingly let me stay in overnight and were openly amused when I approached them during the night.

Me: I need to go to the toilet.

Midwife: Go on then.

Me: But my son… I can’t leave him alone on the ward.

Midwife: Err… he won’t be alone. We’ve got a full ward.

Me: No, I mean, I can’t be without him, but I can’t fit the bassinet into the bathroom. 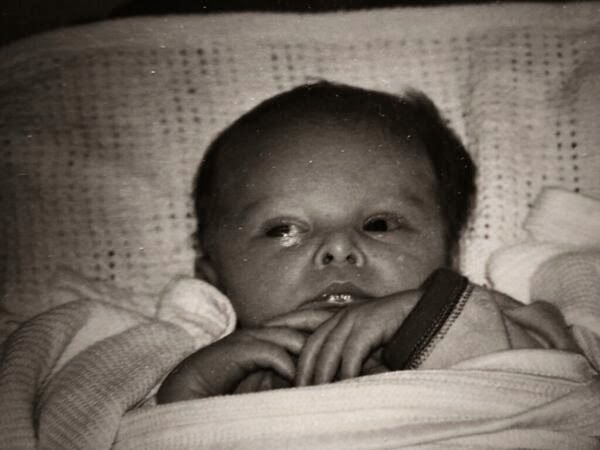 His first smile. First steps. First word (yes, of course it was fucking ‘Daddy’, I had to wait until The Girl to hear ‘Mama’). How I used to sit him in his high chair to feed him, and the border collie we had at the time would sit and watch. How I used to put cooked lentils on his bare feet so the dog would lick his toes and make him giggle.

And all the hours of reading to him, playing with him, trying to get him to go to sleep, please, just sleep, I’m tired, you’re tired, look, I’ll sing one more song, sitting on the floor next to your 80 year old cot, in the dark, but then it really is time to sleep, no, I mean it this time, ok, I’ll sing ‘Golden Slumbers’ one more time, but then, oh alright, yes, and ‘Summertime’ too, ok, if I sing ‘You are my sunshine’, will that make you go to sleep? Then panicking because he would always sleep in late, and I’d hover anxiously in the doorway of his bedroom, wanting to check on him, but not wanting to wake him up. Then seeing his blond head lift, cheeks flushed with sleep, and a smile spreading across his face as he saw me. His love of his grobag, or as he called it, his ‘babass’.

I remember how we used to wander the fields together, him stoutly marching and roaring into the wind with me (it’s great, try it). How I discovered him, aged two, standing on a chair on the kitchen counter, trying to reach for the packet of olives I’d stashed away from him. How, when pregnant with The Girl, I would read ‘There’s a house inside my mummy’ to him, and never make it to the end of the book without bursting into tears, and how he would say ‘Don’t cry Mummy, it’s ok, I love you.’ Which only made me howl all the more, as he gently patted my back, and rubbed his cheek against my arm.

The day he became an older brother, and refused to go near The Girl for the first 72 hours of her life. How confused he was when he saw her nappy being changed for the first time, and the confident manner in which he told his cousin ‘Her willy will grow when she’s older’. The time when, in a fit of pique, he tried to throw a toy metal aeroplane across the living room, but only succeeded in splitting his head open (blood everywhere, four hours in A&E). His first day at school, bouncing happily in from the playground, no shadowy forebodings of what was to come. Then the upheaval of his mother losing the fucking plot a few weeks after his fifth birthday. Life settling back down again.

The time he cried because his great grandfather had died. The direct question of why I no longer speak to my brother (had to fudge that one a bit). The time he told me he was proud of me for writing things. His obsession with his far too long hair, and how his fringe has to sit just so. The way he selects and rejects polo shirts for school, based on how annoying the collar is. Our ongoing battles over what is and what isn’t appropriate for him to watch. His vagueness and inability to pay attention. ‘What’s that thing you just said I have to do more of, Mum?’ ‘CONCENTRATE, THE BOY! CONCENTRATE! YOU NEED TO CONCENTRATE!’ The school report that said he is loyal, kind, caring and ‘has an interesting interpretation of the world around him’. The time he told me not to cry, because I wasn’t a shit mum, I was the best mum in the world. The birthday card he wrote ‘Ed Balls’ in over forty times.

The day I walked past his playground, and saw him, happily skipping along with his best friend. This Shit Just Got Real.

And I owe him so much. For restoring ‘Northern Sky’ to me. For giving me the mother of all earworms with ‘Slipping through my fingers’. For making me see the world with clearer eyes. No one can make me laugh or cry quite like he does. There’s one song that I used to listen to a lot, and the final part of it didn’t really much to me until recently. But then I heard The Boy listening to it and he wanted me to write the last part of it down for him, because the girl who reads it starts to cry halfway through it. And now, it seems to me, it could have been written about The Boy.

Like a broken arrow, I’ll catch the tail wind and draw the clouds, burning sugar, as black as smoke, closing walls; I open my heart. He sings when he hurts. It’s good to sink deep inside, to my only touchstone. He’s a friend in the dark, my strength, my memories. He delights in torture, but he holds my hands and never shields me. Because the best shield is to accept the pain, then what can really destroy me? Let me close my eyes and lie invisible, and perhaps the clouds will pass through me.

Happy birthday The Boy. Thank you. You’ve taught me a lot. I hope you never change.

All my love, always,

Aw! I used to sing Golden Slumbers every night to JJ too. Getting him off to sleep was such a mammoth task which invariably ended with me crawling out of the room on my hands and knees holding my breath! EJ is so much easier - I just put him down in the cot tell him I love him and walk out! Lovely memories of your boy.

Hahaha! Are you secretly me? I can remember singing Golden Slumbers... silence. Right, I'll count to 100. If he doesn't make a sound, I'm off...
Then, having sat silently next to the cot for 40 minutes: he's definitely asleep. Crawling on hands and knees to door as quietly as possible. Slip through door.
'MUMMY!'
The Girl just went to sleep. When she moved out of the cot, she used to go up to bed without telling anyone. I'd find her, in pyjamas, fast asleep and tucked up with no notice.
Bloody Precious First Borns.

Thank you, it's my boys birthday today, he's 9 too. You made me cry! X

Sorry Caroline! Hope your boy had a good day x